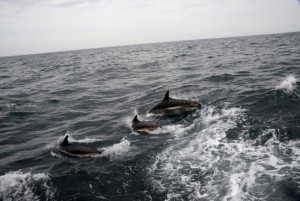 We arrive at the dock to meet our Audubon guides an hour or so after dawn. We’re hauling coolers and backpacks crammed with extra layers, from fleece vests to windbreakers, which we begin to put on as the boat leaves the shelter of Rye Harbor and heads past the Isles of Shoals toward Jeffrey’s Ledge, twenty five miles and several hours offshore. We are a motley crew, hung with binoculars and cameras sporting impossibly long lenses, come to see what swims or flies across our bow. A distant line of glossy ibis see us off.

My birding life began rather improbably with a visit made many years ago to my grandmother-in-law’s winter house on the Gulf coast of Florida. It was supposed to be a family vacation, but at the last minute my husband concocted a reason to remain at work at the college while I went on with our two toddlers. I was very young, still in love, and loathe to believe what everyone else knew, though suspicion and doubt were beginning to gnaw at me. The older woman sensed my unhappiness but there was age and propriety between us which prevented us from speaking of certain matters openly, so she turned to a source of her own deep pleasure in an attempt to distract me. She taught me to bird watch.

Thus, a noisy crowd of seagulls got sorted into herring gulls and laughing gulls. Tiny creatures skittering along the verges of the waves were separated into sanderlings and plovers and red knots. Several species of heron stalked the nearby marshes, along with gallinules and egrets. And the palms and flowering bushes were alive with birds too various for me to begin to keep track of. She was patient. I was smitten and, more importantly, turned away from my troubles. When I returned home, burning with curiosity about my new world, I bought a pair of binoculars at Sears and a hardback copy of the Golden Guide to Birds of North America. Fifty years on, I still have both.

Now, as I stow my backpack under the wooden bench, I know I still carry ordinary burdens of sadness and regret, but as well I am taken with the old curiosity and excitement. What will I see? What will I see for the first time?

Our small craft churns noisily eastward, carving a path in the watery desert. As if to break the brilliant monotony, northern gannets soar in graceful arcs, then dive in dramatic plunges after fish. Atlantic white-sided dolphins materialize by the dozens alongside us, keeping pace effortlessly, executing exuberant leaps.

In a sudden and bizarre intermezzo, a frantic little magnolia warbler, miles off course, finds our boat and rockets into the wheelhouse. Our Audubon guide captures it between his hands and tucks it into a box.

The remainder of the trip blends into a series of wonders I am unlikely to experience ever again. It begins with the sighting of a single Sei whale, a rare animal, skim-feeding on minuscule copepods, its mouth agape. Within minutes we spot another. And another. And another. Until we are surrounded by more than twenty whales as they sieve their daily ton of food from the prodigious amounts of water they gulp. The captain cuts the engine and we drift soundlessly among them. Our guide is telling us that Sei whales are among the fastest cetaceans, but all I see are scores of placid creatures breasting the swells at a leisurely pace, sinking out of sight, and returning to the surface with whispering, brushy blows. These elusive and usually solitary animals seem some kind of benign omen.

Finally, we turn south along the Ledge, threading our cautious way among the feeding whales. Someone shouts “phalaropes at nine o’clock!” We crowd the port rail for a glimpse of one of the avian species we have come all this way to see. I had encountered these birds once before and had counted myself lucky to find a group of three or four in the troughs of waves, impossibly tiny in the vastness. But now, still traveling in what I am coming to think of as a magical micro universe, we are treated to hundreds of them in flocks large and small. Afloat, the red-necked phalaropes present regal silhouettes; when they rise in synchronized flight, their wings flash bright white and black stripes.

Now because, clearly, it isn’t enough that we’ve encountered leaping dolphins, Sei whales in unheard-of numbers, strings of red-necked phalaropes, diving gannets, several fulmars that circle our boat as if to afford us optimum views, black-backed gulls, a sooty shearwater, a basking shark…we happen upon a pod of twenty-five Humpback whales that include at least five mothers with their nursing calves, bored youngsters with nothing much to do but roll about, slapping flippers and tails while their mothers hunt mackerel. As the whales sound, one by one, our team records their “name badges”: distinctive white markings on their upraised flukes.

For the length of a whole day, all I’ve done is watch. Watch dolphins. Watch whales. Watch birds. Watch the way the clouds form and re-form and how the sea rolls away like shaken lengths of blue and gray satin.

This expedition has been an extension of those halcyon hours on the verge of the placid Gulf of Mexico with my wise grandmother-in-law when she gently distracted me from my sorrows. When I was invited to simply watch. To see without a specific purpose. To see for the first time. To see again. To name the natural world as a way to acknowledge its power of solace.

As we enter Rye Harbor, through the breakwater where purple sandpipers scatter on the rocks, our Audubon guide releases the errant magnolia warbler back to its land route north.