As we fasten our seat belts in preparation for landing in Boston, our pilot announces that we are approximately 125 miles from Logan and will be at the gate in about 25 minutes. 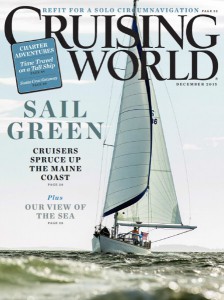 That 125 miles represents the distance we had traversed in any 24 hour period as we crossed the Atlantic on an eight-day voyage from Tortola to Bermuda on the brigantine Eye of the Wind. We are returning by air from an ocean adventure that had offered us an extraordinary gift, one I can’t imagine we could have experienced any other way, particularly in this new century with its insistent demands. This trip had given us the gift of time. Days and nights were carved into arbitrary segments according to watches. For long gentle hours time passed as slowly as drifting clouds. Then, almost without warning, as the clouds massed and darkened and scudded, time accelerated and we had to be quick to respond to the immediate demands of sails and helm. Those patterns repeated. With reference only to wind, water and sky, notions of time out of time, time away, time on our hands, time past and timelessness…all took on new meanings. We were suspended in the elements, cut off from all the cues we had come to rely on, dependent on and tuned to elemental forces. And happy. We are settling in to the past.

One morning, Rasmus hands out short lengths of rope so we can practice the knots he patiently demonstrates: bowline, clove hitch, sheepshank (for some reason, I particularly like this knot that makes a long line shorter), rolling hitch. We are occupied for most of the rest of the morning tying and untying. Ole gives Nate a private tutorial on how to make a Turk’s head.

On another morning, Cornel invites Nate to explain the principles of celestial navigation. In the spirit of the voyage of the Mary Celeste, Nate has brought his own sextant aboard. He takes readings around noon and sunset every day. Though trained in celestial navigation, Rasmus and Christoph devote precious off-hours with Nate honing their skills and calculating our position by this means. Others of us struggle to grasp even the rudiments of this arcane and beautifully accurate science that weaves a knowledge of the stars and planets, of longitude and latitude, of angles and magnetic forces, of winds and currents into an elegant map of a vast ocean upon which a very small vessel is making its way from shore to shore.