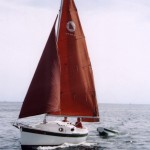 Our sailboat—SENSEI—is not much bigger than, say, an Airstream trailer, its beamy hull framing a cabin below, appointed in teak. Spare touches of bronze: portholes, water pump. Starboard and port settees that make into a large bed. A counter to accommodate the two-burner gas camp stove. Two small fold-out tables. A little toilet. Carefully designed storage places. A space easily heated at night by a fat candle. And on deck, a deep cockpit and clean lines from the mizzen mast to the jib stay on the bowsprit.

Sometimes I just need to document them: those days that, both at the time and in retrospect, seem suspended in a special medium, some kind of transparent gel formulated to preserve images and sensory perceptions as transient as the restless shore birds gathering for their marathon flights.

Our choices of destination are based on wind and whim. We might, as on one balmy late summer evening, motor to Cliff Island’s sheltered cove. The sunset sky is behind us in oranges, then purples like a late-summer-evening stage set. Lobster buoys show bold stripes against the dead calm black of the water. We drop anchor and rig up the canvas awning that we designed to ride on the boom, providing shelter from drizzle or dew or beating sun. Then we eat cheese, drink beer and wine, and just look. As the sky darkens, as the migrating ducks raft up for the night, as stars begin to blink and satellites zip among the constellations like motorcycles in stalled traffic. And then to sleep a sleep of a rare and uninterrupted kind.

There may be nothing that feels so indulgent as awakening on a lazily rocking sailboat, making a cup of tea, and spending the next few hours alternately reading, working a crossword and watching the morning scene: an elegant young loon diving near a cormorant and surfacing with a silver fish in its bill; black and eider ducks working the mats of rockweed drifting on a retreating tide; busy plovers and sandpipers along the pebbled margins; a rattling kingfisher nearby and, far overhead, the keening osprey.

Now perhaps we’ll go for a row in the Nutshell Pram. Perhaps a wade. Even a swim. Certainly a walk onshore where goldfinches dart in the scrub and monarch butterflies gorge on goldenrod in preparation for their journey to that single place, unimaginable miles away in Mexico.

Then, as the breeze freshens, an afternoon sail, everything up, on a broad reach to the little islands called the “Goslings.” Another anchorage. Another sunset. Another sleep.

Suddenly, in the deep of night, a wind. A howling wind. A wind that causes the stays to sing and the awning to flap furiously. A wind on the nose that pushes SENSEI back and forth, has her tugging restlessly at her mooring line. A wind that seems to blow even the stars. This, then, is the sleep that sleeps with one eye open. The sleep that waits for the black sky to fade to gray as though to see what in the night can only be heard will propose reassurance.

Reassured, we set two small sails—jib and mizzen—and head back on the windy, choppy bay. The dinghy rides a foamy wake. Following seals pop up now and then alongside. We approach our mooring under sail and almost grab the pennant on the first pass.