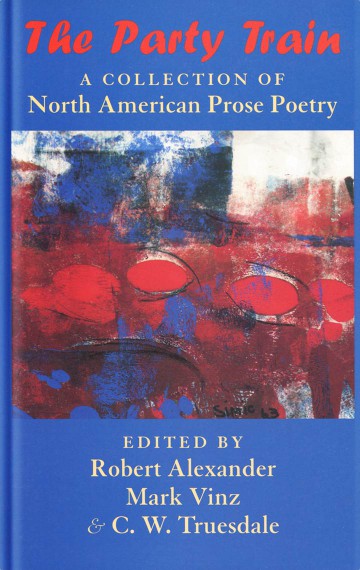 Prose poems by 144 poets trace this genre in North America from Nathanial Hawthorne and Henry David Thoreau to poets just beginning their careers. Many writers best-known for their fiction, including Hemingway and Faulkner, are included, as are many poets whose prose poetry is a lesser known part of their work.
Reviews

“The Party Train proves that the prose poem not only has been thriving in North America for years, but has also developing its own distinctly American characteristics … for North American prose poetry the definitive anthology.” – Peter Johnson

I’d go out on the ocean.

I’d ride him on my boat…

…and in this manner confront the accumulated terrors of half a century while still having fun–an admirable pursuit that is, perforce, always limned by fear and colored in exigencies particular to the piloted vehicle (e.g. boat: in a microburst, otherwise called a “white gale” for its sudden disruption of an unstormy sea, back the jib, reef the main and keep it close-hauled while running before the wind until the craft os released; horse: try to intuit the cause of its momentary panic, idle her powerful engines of muscle and quiet the pounding of the blood). How I prefer a chosen end: me upon my pony on my boat.