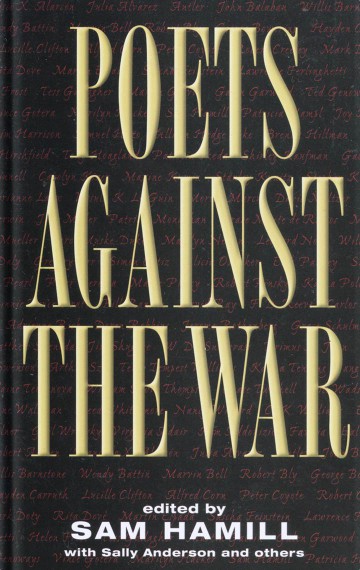 Sometimes the Wider World Can Only be Apprehended Obliquely

Snakes are always all of a sudden, no matter whereI encounter them. These two were baking under a sheet of black plastic that covered the old bales of mulch hay I needed for the onion row. A garter (imagine it wound in delicate coils about a stockinged thigh!) and another I can’t name (silver-white core emblazoned along its length with brown ovals etchedin delicate black). Exposed and surprised by light, uncoiling, they tongue the bright air. Spiders hurry away carrying bulging white sacs. Ants rearrange their ranks. There has been a profound disturbance. Each small movement occasions an intricate series of counter movements. I couldn’t have predicted, for instance, the thousands of reactions to my shadow.

(This anthology) publishes the best poems submitted to the web site. This collection is both a cry against impending (Iraq) war and a celebration of the long and rich tradition of moral opposition and dissent by American writers and artists.”  jacket copy

“A landmark anthology of original poetry that registers each author’s opposition to the war with Iraq. Its origin can be traced back to the day when Sam Hamill received an invitation from Laura Bush to a White House Symposium on “Poetry and the American Voice.” Upon opening her letter, he was overcome by a sense of nausea and disgust, having only recently read George Bush’s proposed ‘Shock and Awe’ attack plan for Iraq, which called for saturation bombing.

Hamill’s response was to compose a letter addressed to ‘Friends and Fellow Poets in which he called upon writers to ‘reconstitute Poets Against the War movement like the one organized to speak out against the war in Vietnam.’ …The response was overwhelming. Over 13,000 poems were donated by nearly 11,000 poets including work by Adrienne Rich, W.S. Merwin, Galway Kinnell, Robert Bly, Marilyn Hacker, Grace Schulman, Shirley Kaufman, Katha Pollitt, Hayden Carruth, Jane Hirshfield, Tess Gallagher, Carolyn Kizer, Jim Harrison, Terry Tempest Williams, and former poet laureate Rita Dove.