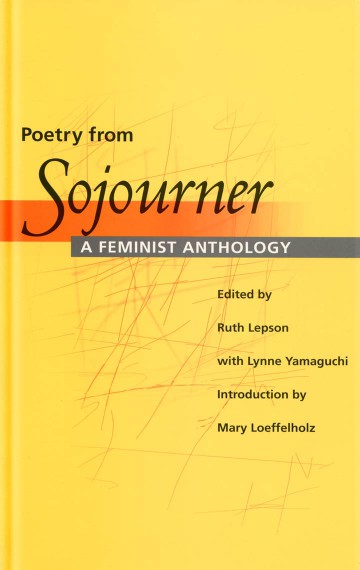 Collection of poems from 25 years of Sojourner. Some poets very well known, others lesser known.

For much of its history Sojourner was the most widely circulated feminist literary journal in America, and more than 1,200 poems have appeared in its pages since it began publication in 1975. Nearly 150 of those poems are collected in this volume, where together they form a powerful testament to the vibrancy, wit, and diversity of feminist poetry.

In addition to works by such well-known poets as Molly Peacock, Nikki Giovanni, Betsy Sholl, and Adrienne Rich, this collection includes poems by women from a host of different backgrounds, including many whose work appeared in print for the first time in Sojourner.

Some of these poems explode with energy, others speak with a haiku-like softness; some discuss love, lust, and sexuality, while others deal with loss, divorce, and revenge. The voices collected here are old and young, rural and urban, straight and gay, from mothers and daughters to wives, lovers, and countless others, all contributing to this anthology’s wide-ranging conversation about feminism and feminist poetics.

“This collection of poems reminds me of found letters that describe more truthfully than any official history the mind-set of a generation. Feminism–when it still related to the natural world (beauty) and was committed to the pursuit of happiness in relationship–feminism as narrative–from page one onward is this anthology.” -– Fanny Howe, author of One Crossed Out

“From Levertov, Rich, and Dove, through Hejinian, Howe, and Collins, to Moore, Becker, Potter, and Goldberg–there are poets included here whose work is, by any contemporary poetic standard, feminist and otherwise, enormously rewarding, challenging, and important.”   Kathy Fagan, editor of The Journal and author of The Charm