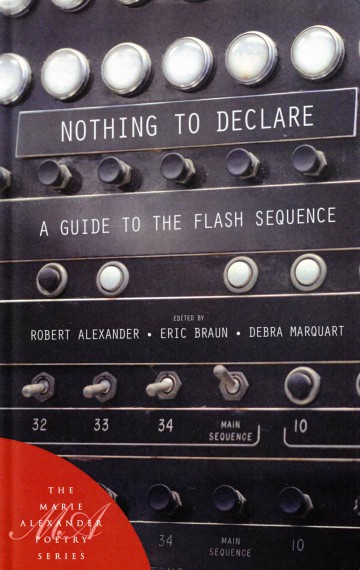 A Guide to the Flash Sequence

(from A Note from the Series Editor, Nickole Brown)

What you will find here represents the diverse assortment of work we received: linked prose poems, narrative sequences, lyrical essays, and many surprises in between, such as groupings of koans and fairy tales and epistolary addresses. … This collection of flash sequences is a testament to the simple pleasure of continuity, of seeing what comes before and what comes after, fulfilling that basic human urge to answer the question, What next?

Dear Scorpio: Letters to My Mother-Self

1.
Look, Mom!
You didn’t tilt your head to squint up at the topmost
branches of the oak tree. You didn’t turn to see them plummeting
off the granite cliff into icy quarry water. You didn’t
watch as they propelled sleds over precipices. But you always
kept watch.
2.
Your Gethsemanes: the waiting rooms: those outer chambers
with their molded plastic chairs and shelves of glossy, anodyne
women’s magazines. The offices of principals. Bedsides.
You did keep watch. (Don’t cry. Don’t worry. Just sleep.
Don’t die.) Until the middle of that night when they woke
into the long night-of-no-mother.
3.
Face it. You had to put the oxygen mask on yourself before
assisting minors. Your plane was in free fall. Ordinary household
objects, stripped of their innocent uses, had become
lethal projectiles. Your understanding of the basic physics of
family was coming apart like rivets popping one by one off
the skin of a wing. You had to think quickly, make split-second
decisions. But you could always reconsider once equilibrium
was restored.
4.
If you’d kept them you’d have taken them to Disneyland. If
you’d kept them you’d have gone to every soccer game. No
basketball tournament would have gone uncheered. If you’d
kept them you’d have run interference like a tight end down
the streets of pre-dawn paper routes and the dangerous halls
of public schools. If you’d kept them nothing bad would ever
have happened to them. Ever. (You’re lying. You wouldn’t
have taken them to Disneyland.)
5.
So your childhood was idyllic. As was theirs when you think
about it. All you did was blow your Fifties bubble into their
Sixties bathtub. Bikes & sleds & basketballs & baseball
gloves & books & puzzles & swim fins. Plus the puppies &
dogs, kittens & cats, goats, chickens, ducks, geese. And talk
about friends! The best! OK. So you didn’t have to change
towns and schools and friends and parents as often as they
did. But at least you knew how important it was to leave them
to their own devices. That’s got to count for something, right?
Ask them why don’t you?

6.
Maybe it’s the Purgatory-to-Heaven guarantee that keeps you
kneeling in this perpetual Gethsemane—sweaty bait for deer
flies and mosquitoes, bending into the green beans, trying to
thin impossibly tiny carrot shoots, picking disgusting bugs
off a variety of squash leaves, hand weeding—offering up
your long-suffering for the souls who almost made it, the
ones crowding around the back gate with their weepy eyes
on the prize of everlasting life. But you don’t believe in any
of it. Even, for that matter, the possibility of eggplant.
7.
Remember how, later, they used to say that you, oldest of ten,
must have known everything there was to know about raising
children? You, who considered yourself an only child with
nine siblings. You tomboy, secret reader, rider of the purplest
sage, sailor on the bounding main, girl detective. What did
anyone think you could possibly have brought to the changing
table? And your mother. Her parting words, as she carried
a wedding-morning breakfast to your childhood bed on a tray
set with her antique yellow and pale blue china: Never say
no to your husband. Remember how beautiful you looked
wearing her elegant dress? Remember your exquisite ambivalence?
8.
You knew a few things. Little brothers sick together (tonsils
chickenpox mumps measles); little brothers hurt together
(stitches bandages); little brothers wounded together (parents
fighting parents disappearing); little brothers stick together.
9.
So what do you think you can still make of your stubborn regret?
That bargain basement hair shirt. Do you really want to
wear it for another season? They’ve forgiven you your trespasses
long since. Isn’t it time you stopped crying again?
10.
And shouldn’t we consider love? You know, that common
plant with its companion herb. At once a venom and its antidote.
A scourge and its cure. A sore distress and its comfort.
11.
You and I would do well to read those tabloid horoscopes
once in a while, standing in line at the supermarket, to remind
us that we are (perceptive & intuitive strong willed with a
highly developed sense of sensuality, possessive, jealous, manipulative
& controlling, intensely loyal, charming, often misunderstood)
who we were then, who we are now. I love you.