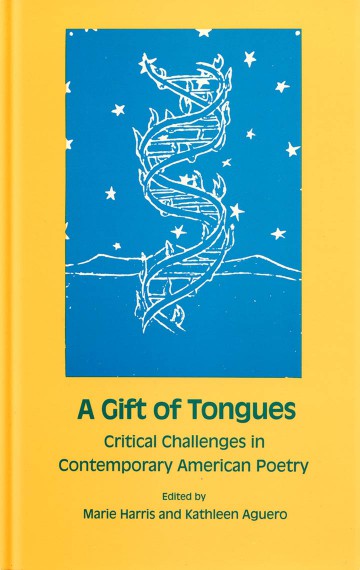 A collection of critical essays, A Gift of Tongues introduces to a wider audience poets who have been ignored even as it proposes a new literary canon that more fairly represents Chicano, Native American, black, gay, women, and Asian-American writers. A common theme is survival: Alice Walker and Sherley Anne Williams borrow from the slave narrative tradition to remind us that for a black woman the very act of putting pen to paper is not only precious but hard won. Similarly, Wendy Rose and Joy Harjo seek sources of female-based power in their Native American ancestry, Paul Lauter argues against academic elitism, and Joseph Bruchac sums up the spirit of resistance among prison poets: “If such a community of letters can spring to life in the blighted atmosphere behind high concrete walls and razor wire . . . there may be hope for us all.” Though in The Psycho-political Muse Breslin argues that a radical poetics grew from the politics of the New Left in the Fifties and Sixties, he fails to prove his point. In fact, close readings of Ginsberg, Lowell, Plath, Merwin, and Wright reveal a stress on alienation from mass culture rather than social change. Moreover, Breslin’s assumption that American culture is monolithic is disputed by the rich outpouring of minority voices in A Gift of Tongues. Lisa Mullenneaux, Iowa City, Iowa

The co-editors of A Gift of Tongues: Critical Challenges in Contemporary American Poetry here undertake to represent the disenfranchised: those from minority groups whose poetry, they believe, too often is deemed peripheral to a predominantly white, male and Eurocentric literary canon. Celebrated poets, such as Gwendolyn Brooks and J. D. McClatchy, appear alongside less familiar writers, and while many pieces share common themes–loss of love or faith, despair at isolation, pleasure in communion–what are consistently notable are originality of vision and the evident desire of each contributor to avoid structural or contextual formulae. Dennis Cooper movingly details the thoughts of a male prostitute: “I daydream right through it / while money puts chills on / my arms, from this to that / grip. I was meant to be naked.” Juan Felipe Herrera challenges the American dream: “We are all assassins / coveting the warmth inside the jeweler’s castle. / I came to America.”