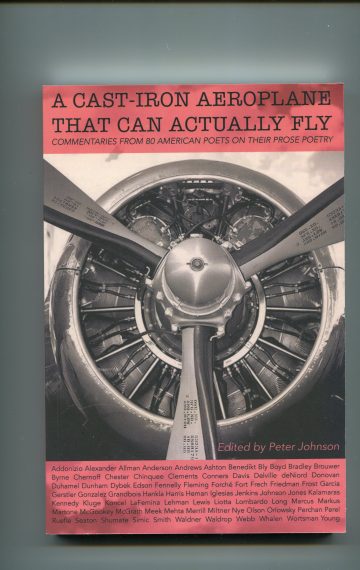 Commenaries from 80 American Poets on their Prose Poetry
$21.95Order from Mad Hat Press

“A solid collection of prose poems written by some of the best American practitioners of the genre. It also provides a good way of looking at the prose poem as a legitimate genre by focusing on what the poets themselves have to say (about their own work)….As the…commentaries suggest, hearing poets describe their writing processes can often situate their prose poems in a broader literary, historical, and cultural context, and may even help us to evaluate and appreciate their poems.” Peter Johnson from the Preface

We anchor in a bay and put ashore in several boats, approaching the settlement by one of the many man-made canals. Red-throated, long-beaked birds hang on the trunks of banyan trees. All manner of shore birds fly and fish in the shallows; some of our number are well-occupied recording their shapes and cries while others busy themselves at the listing of flowers which run from yellows to deep purples and seem to have been cultivated for some purpose we cannot readily discern. Grasses of blue-green hue have been cropped around shallow sandy pits in what appear to be large gaming fields. At intervals, thin sprays of fresh water erupt unbidden from the ground. Enormous white houses of phantasmagorical design, each with a long blue pool shimmering under a delicate opaque structure, occupy every meter of dry land from the verges of the canals to the wide avenues to the raked beaches. We could glimpse no human activity within. There is evidence that the entire population left hurriedly. What rumor? What disastrous news? They must have gone overland. How else to explain the powerful boats abandoned at docks?

Sometime in the 1980s I came across a call for submissions of 100 words from a new little magazine (literally, little, as it measured about 3 X 3) called Paragraph. I had just finished a draft of a free verse poem that was vexing me for reasons I couldn’t pin down, and I decided to re-cast it as a prose poem, a form I had first discovered in translations of French poets Charles Baudelaire, Francis Ponge, and Jean Follain and in the work of American poets as diverse as Walt Whitman, Gertrude Stein and Russell Edson. I had even written a few collected under the title “Lives” in my first book but had not pursued it further until I undertook this exercise. It was unexpectedly satisfying. “Weasel in the Turkey Pen,” was accepted and became the title poem of my second book.

I began to write more poems in the form, hardly aware of the reason for its appeal. Only as I reread my output over the following months did it occur to me that it was its narrative possibilities that had drawn me. I could tell my short, dense stories without abandoning any of the devices of poetry save the line break. Even rhyme remained available, albeit in subtle ways. I continued to experiment, insinuating more and more elements into the form’s rather elastic container. I incorporated fragments of letters and journal entries, bits of instruction manuals, snatches of overheard conversations. It became the ideal (perhaps the only) way I finally found to tell the story of the wounded 14-year-old boy we adopted into our family.

But perhaps the most unanticipated surprise of the form was its capacity to embrace humor. Not the humor of light verse, with its wit and wordplay, but a more nuanced, almost deadpan approach to our shared peculiarities. I began to explore and enjoy the possibilities of allowing another element, another layer into my poem narratives.